Arrow in a synsemic perspective (1)

Letter by Galileo to Leonardo Donato, 1609

Some very short notes about the history of the arrow as a graphic sign (there are four previous posts on this topic in italian: 1, 2, 3, 4).
The discussion started from the article “Mapping symbols to response modalities: Interference effects on Stroop-like tasks”(pdf) presenting a Stroop-like experiment on the interference between a word and an “arrow”.
In a few words, from the abstract: “The subjects were required to respond to one stimulus — an arrow (e.g., →) or a word (e.g., left) — and ignore the other”.

Pressing a key is different from following a direction, but we can say that the arrow is more effective than alphanumeric characters when the purpose is to carry out an “action” from a graphical “stimolous”.

The question is: what is more important when you read? Vocalizing the words or using what you read in order to act?

Reading this article led us to reflect on what is an “arrow”, why it works so good, when it was used for the first time to point (indicate) something or to show a direction.

Arrow is important in a synsemic perspective, because:
1. nowadays it is one of the most common writing element used to connect graphic elements by spatial contiguity;
2. it probably became, in the XX century, the most used writing element for pointing direction AND sense.

We found several example of arrow in books since the second half of the XIX centuries (Enrico Poli’s post provides several exemples), but in the book L’oggetto della rappresentazione written by Giovanni Anceschi, published in 1992, we found this image from a manuscript of “Galileo Galilei”, the letter to Leonardo Donato of 1609, showing the movements of the moons of Jupiter.

The most ancient exemple of “arrow” used as a pointer that we could find was in the inner cover and in the folio 19 recto of  “A Prognostication Euerlastinge of Right Good Effect” (1596) written by the english scientist Leonard Digges (Linda Hall Library of Science, Engineering and Technology) – but we presume that older exemples can be found.
We think this could be a contribution to the debate about the history of the arrow we found in this discussion.
We are not specialist in this subject so, if you know something older, please tell us. 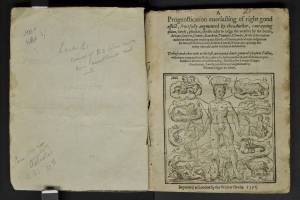 By the way, seems that arrow started to be used frequently just during XIX century as pointed out in this post by Enrico Poli.

This entry was posted in Post in english and tagged Arrow, Direction, History of the arrow. Bookmark the permalink.