The interfaces of what are usually referred to as “construction and management games” [games in which planning and logistic challenges are emphasized, the player’s goal is to build or manage something with limited resources in an ongoing process] (but also strategic ones) are interesting examples of synsemic texts and, above all, they show a concrete application of the idea of analogy.

The interesting side is the fact that these texts must, on one side, allow the player to deal quickly and easily with mathematical variables, without referring explicitly to the “cold” mathematic expressions and symbology, on the other side to be enough complex to be a challenge for the player.

As the space of the most part of video games is a two or three dimensional space in which well defined graphic elements are read (linear texts are seldom used and almost always in a non linear environment), synsemia in video games can be an interesting thread.
I think that the basic synsemic structure is evident even on the most simple video games where the only possibility of interaction is the mouse (or the trackpad) and/or the keyboard.

More sophisticated interfaces (such as controllers or accelerometers) just “hide” or shift out of the monitor part of the “text”.
So I will start from the most simple and accessible flash games, which have the lowest “entry barrier”.
I decided to start from construction and management games because of their evident visual structure and because the interface is quite rich of “written” elements. Also strategic games show similar characteristics under the point of view of the interfaces.

I chose Mc Donald’s video game and Youda Farmer (there are three versions 1, 2, 3).

As I wrote before managing games are usually based on a mathematical problems “covered” by a story or an environment.

The mathematical problem is in general a problem of optimization between three or more variables. The cover story is an analogy connecting the abstract problem with the player. Analogy consist on using a known domain to explain an unknown domain which has a similar (analogic) structure.
The analogy defines a “frame” where all the elements are consistent and in the same time strictly related to the mathematical problem.
The specificity of games is the fact that analogy must not necessary show the whole structure of the problem: the solution of the game is to find it.

Synsemic elements found in the games I analyzed:

1) There is a sort of “main field” defined graphically by analogy (a farm, a town, a shop). All the elements of the game are semantically and spatially in relation with it.

2) Graphic “elements” usually have three functions, and sometimes they have all them together:
“definitors”: elements which have the mere and redundant role of defining a frame;
“actuators”: elements which are used as the active part of the interface;
“indicators”: numeric data (often using statistical charts or well-established graphic tools).

There is usually a redundancy between all the elements and the frame.

These elements can be more divided:
for example in this first image definitors are the rooms and the characters, actuators are the keys in the bottom left side and in the top right, but also the object highlighted on mouse over; indicators are pop out graphs and numbers – but also texts – in the lower part of the screen; 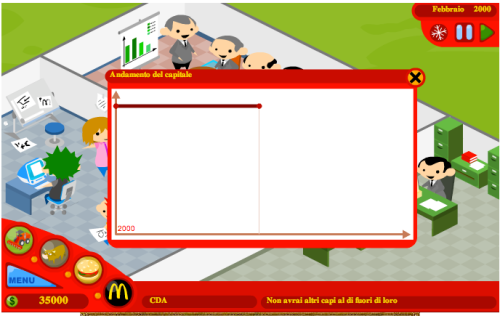 or more or less mixed together:
for example every element of the village is both a definitor and an actuator, indicators on the contrary are isolated from the main frame in boxes, balloon and in the lower part of the screen. 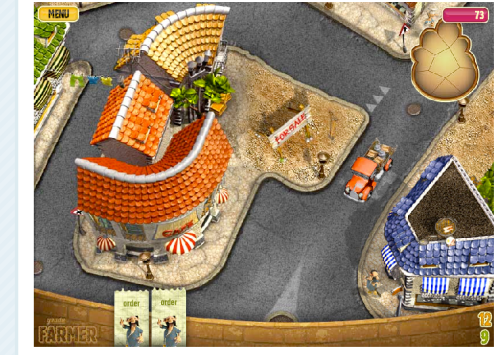 What is important in our perspective is that:

1) You can define a known, familiar, easily understandable frame, if this frame is consistent and clearly related to the problem you want to explain, you can use the frame to explain or to teach complex problem. This process seems simple, but it’s quite difficult to find and to build consistent analogies and not all the problems explained in such way become more easily understandable.

2) You need elements to define a context, a “frame”, in which every element has a specific value. This is the base of synsemia.

3) Known elements work better for defining a frame, but you need a constant process of expansion introducing new elements and consolidation. Giovanni Anceschi in Monogrammi e Figure names Diastolic the process of expansion and Systolic the process of consolidation in which the most of the new elements are discarded and just few becomes “conventional”.
A natural writing system is alive, as all the languages, new elements are introduced to fulfill all the new necessities, this is the diastolic process.  Not all the new elements become part of the writing system, some of them are hapax legomenon, some of them enter in the writing system and they are reused, simplified, modified, adapted, and this is the systolic process.

This entry was posted in Post in english and tagged Interaction Design, Synsemic artifacts, Video Games. Bookmark the permalink.

2 responses to “A new possible thread: video games and synsemia”